My earliest song writing memory was when I was eight, my dad was in the building trade and I wanted to be a builder.

“We are the builders it’s such a groovy job

I am the brick layer and my name’s bob

We work all day whether hot or cold

I am the plumber and I’m very, very old” and so on…

Things have changed a little since wanting to become a builder, but one thing that’s not changed is song writing.  I think I’ve always written songs for as long as I can remember.

I find songs tend to just ‘happen’ I’ve had difficulty explaining this to people in the past.  “How does it just ‘happen’? they would say. I’ll give you an example, it’s a Monday morning, I’ve got up late (I always take a cheeky lie in on a Monday) and I’ve dragged myself to the shower, mid shower a tune and lyrics appear in my head.  I run from the shower to my room, singing it over and over in my head and grab my phone and record it.  I’ve learnt now to always have my phone in the bathroom with me, you never know when a song is going to happen.

Another example, I’m lying in bed crying over a guy that’s dumped me. I’ve a piece of paper and a pen next to me and the words and melody appear on the paper. Sometimes a first verse and chorus will appear naturally, but I might have to think about the second verse a little more, it can takes months for it to feel right sometimes.

You will also occasionally find me singing as I walk down the road, songs can happen in the most inconvenient places. I would say my three most creative spaces to write are in my attic, in the shower, when I am cat sitting, whilst driving the car (that’s very inconvenient!!!) or when I’m sat in the forest or on the beach.

I like to write songs to comfort people, I always think if I’m going through something, then others must be to, so I’m going to write to make us all feel better.  It’s almost like a form of counselling, I’m a better, clearer person when I write.

Every year the way I write changes, well in fact I think we are always changing, so it’s probably changing every day in a tiny form. For example last year I fully completed one song and the year before about five, and the year before that about ten. My life became a bit more settled last year and I didn’t feel the need to write as much which gave me the space to focus on learning the guitar and finally gain my musical independence!

A lot of my writing will start “Hello piece of paper, how are you today? And then what ever comes out comes out.  Once I sit down and actually write, something will appear, but often I will faff and squirm trying to get myself to sit down. I also like to have lots of colours when I write and you will find hearts and flowers all over my song sheets and VERY rough handwriting, if its readable to anyone else but me then it’s not true Anna Artwork.

I’m going to leave you with the lyrics of the chorus from the song I completed last year, it’s called ‘As you are’

As you are, you don’t have to be anyone else

As you are, just be you be truly yourself

There’s nothing to hide behind

You don’t need to cover up

Be the beauty you already are 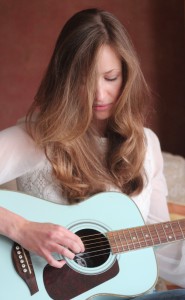