I’m full of adrenaline today, but thankfully calming down now! I did something last night I’ve wanted to do for soooooo long!!! I did a talk for the first time, it was nothing like I imaged and in fact was so much better!

The setting was perfect, dim light, a window overlooking the sea, a small group of people and that nice fuzzy warmness you get when you know you are in a room of kind souls.  I am very sensitive to my surroundings and it makes a big difference to my comfort, so I was very lucky last night.

I am not going to deny, I had built the whole thing up in my head to something huge, I felt dizzy and sick and almost couldn’t breathe yesterday morning, but the little voice that said “just show up and the rest will happen” managed to calm me slightly. Even while each group member were introducing themselves the voices in my head were saying “what do you know, all these people sound so sorted, do you have a point in what you have to say, will they think you are stupid” but still a voice that said “be yourself, be yourself” fortunately was overriding the other icky voices! Ew, ew, those blimin voices make you feel yuck don’t they!!!

I’d had so many ideas as to what I was going to talk about, subjects kept flying through my mind and I couldn’t seem to come up with anything that was ‘the one’ so after exhausting myself I decided to chill out and let it happen, I’d know what I wanted to talk about when I arrived. Just be yourself, and talk about what you stand for, which is doing what makes you happy, the little things in life and being yourself! Doh, and there and then I finally I decided what I would talk about 😉

I took a bag of stuff, things that are important to me, and had a few bullet points in my head to talk around encase I got stuck, I think having a room of people staring at you definitely calls to have a plan B and C in place just encase your nerves get the better of you. One of the things I took was a little book that I found in a charity shop, it’s called babies firsts, as I am sure you can guess it’s to write down each thing your baby does for the first time. Well, I decided to cross out the word baby and write Anna! As it’s important to me to try new things, it makes me feel alive! There were a few chuckles in the room as the second half of the talk was described as a show and tell, and I totally loved it!

Fortunately for me, the group was small and I felt like I was talking to them individually, I was able to interact with them and also get feedback. I think this is something that’s so so important to me, I much prefer smaller groups and one to ones. It seems to bring the best out in me and it feels like you reach people on a more personal level.

When I came away from the talk my boyfriend asked me what I had learnt from the experience, and I think it was a few things, firstly it reinforced that I like small, cosy, personal settings, and secondly that maybe I did okay, oh, and it also reminded me that stuff is NEVER as bad as we build it up to be! I suppose it made me believe in myself a bit more and most importantly I really enjoyed it, it went by in a flash!

Since leaving last night, Mark and I celebrated with a glass of yummy sparkling rose, although I probably did his head in going on and on at how exciting the whole experience was, and then I had a little celebration this morning and I listened to Keith Urban’s new album! And to my surprise there was a song on the album called ‘little bit of everything’ and that’s what it’s all about hey, having a little bit of everything, balance I think they call it 😉

Last night was another little happy moment in my life and I am so glad I did it, thank you to the ladies at Woman mean business in Exmouth that made me feel so supported and gave me such positive feedback, I couldn’t have wished for a nicer ‘First time talk’ Thank you

Oh yes, PS! I wrote in my little ‘Anna’s Firsts’ book last night! And here’s what I wrote 😉 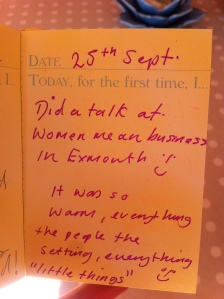